One week is usually considered to be long enough to get back to reality and recover from a concert regardless the performance or expectations. However, Luciano Berio’s Laborintus II and the Vita Nuova session at the Holland Festival in Amsterdam were so exceptional, that even if I were geek enough to activate some sort of linear accelerator, this wouldn’t get me more time to sort out all the impressions and find my way out of Mike Patton’s labyrinth of sound perfection.
Therefore, similar to Patton’s role in Laborintus where his narrator voice was guiding us like Ariadne’s thread through the maze of harmony, I will use a few libretto quotations to have some points of reference to this astonishing experience.


Laborintus II is literally a "labyrinth of relations" between the text and music, the live performance and pre-recorded electronic music, and of course between all the performers: a tape, three female vocal soloists, a mixed choir of eight, a narrator and an ensemble. You’d better be an expert at combinatorics or relational databases to make sure you have all the interactions (and musical references) covered.

For ICTUS, the Flemish ensemble conducted by Georges-Elie Octors, this was not the first encounter with the Laborintus. Their first performance dates back to 2003, the very same year when Luciano Berio died. Probably the greatest challenge was coping with different styles. On their webpage there’s a comment that Laborintus is "highly dramatic but can easily twist in a light-hearted jazzy or even funky swing feel not unlike a cheap sixties’ Italian police movie, complete with nervous walking bass motives."

The Nederland Kamerkoor were also part of the 2003 Laborintus performance, and they prooved they were an excellent choice. It’s not a typical choral work, yet compared to other choirs I‘ve ever heard, they were perfectly matched up and balanced. In general, I suppose chamber choirs have a great advantage over the symphonic choirs in many aspects.

Now, before I psych myself up, I am going to skip the odes to maestro Patton for now (and besides, all the superlatives from us, the notorious fans, must be quite annoying already) and will start with the highlights of the evening.


From the very first bar, the introduction actually was a real beginning of beginnings. It took us back to the origins of music, to the human voice itself, in particular the imitation of the child language. Mike the narrator announced a new life being born: "In that part of the book of my memory before which little could be read, there is a rubric which says: The new life begins!" The female soloists (btw. huge compliments to sopranos Annet Lans, Margriet Stok and alto Karin van der Poel from the NL Kamerkoor) gave birth to a nice melody, promising us that we were to experience a real challenge that the life brings. Later on, as the music evolves, we hear some crying and suffering, beautiful harmony of cellos, harps, flute and even madrigals.


Apart from the references to Dante or Eliot, the Bible was an essential part of the story as well. The soloists were dramatically enumerating the descendants of Adam, the Babel with all the languages being mixed up was pretty obvious as well. I personally liked the smooth flow which suddenly resulted into almost hysterical Hosana yelling. Mentioning the flood of waters destroying all flesh, the music got even faster and louder. This is exactly the part, where Mike Patton uses his beloved bullhorn and we experience a minute or two of God’s fury and punishment. I guess the bullhorn thing is not in the original score, but this was something Luciano Berio would approve of beyond any doubt.


Getting a bit metaphysical here. Mike’s treatise on "the nature taking its course from divine intellect and its arts" (and art following nature, etc. etc.) together with the symbiosis of electronic music and the live performance (greetings to John Cage's admirers) arouses suspicions that the composer was taking a dictation from someone transcendent or supernatural. How else would he get this absolute beauty?
However, soon enough, it all collapses and the usury and chaos come into action. The greedy human-natured musicians started to show off until the conductor gave up and left the stage, letting the ensemble on their own. At one point, they were shouting at each other in order to keep the others quiet (Silenzio!), concluding to even more noise and buzz. I loved it! This is exactly what I did with other kids at school to annoy the teachers!


The last part was full of hope and very peaceful, being whispered by the choral voices. Singing lullabies as if there were babies dreaming was an interesting metaphore for the end of the life concept. Although there was some final graduation and dramatization, the silence of the grave was stronger than any other attempts to triumph over life for the last time and before the last beat of the music itself.


Now, in order to make a decent bridge between Luciano Berio’s Laborintus II and the The Vita Nuova Session (soon to be added here), enjoy some photos from the event: 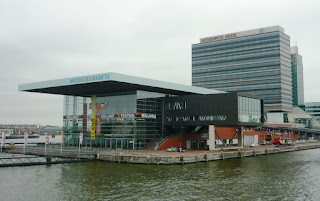 Muziekgebouw aan’t IJ (easier to spell than to pronounce) 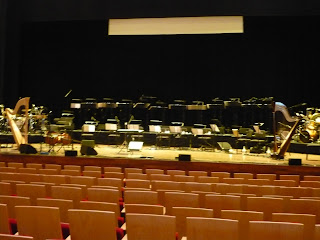 Muziekgebouw aan’t IJ from the inside. Be the first to see :) 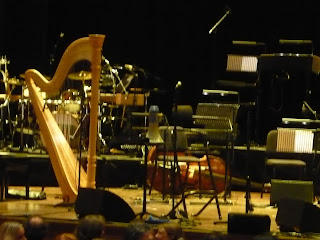 The harp, the cello: check! The bullhorn: check! Mike Patton's influence is so obvious here!

A switching board, a frequency shifter, a time compression–expansion device, some recording and playback equipment, I suppose. Actually, I don't, I have no idea at all ... 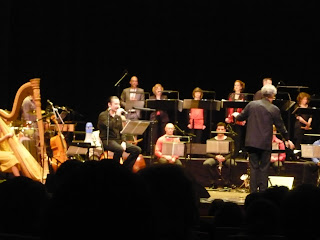 Mike Patton: "Dolcissima Morte vieni a me vieni a me. vieni a me, io porto gia lo tuo colore." I had no other choice than to shoot it. Everyone else was shooting anyway! And besides, this is the only photo I took during Laborintus II performance. 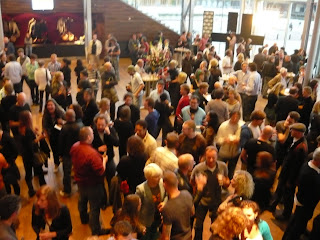 Mike Patton fans, jazz freaks and the opera & contemporary music admirers discussing the performance during the break. I guess normally it would be impossible to have them together at one place! 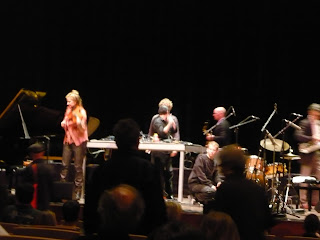 Getting ready for the Vita Nuova session during the break! Our mouths are yet to be opened wide in astonishment! 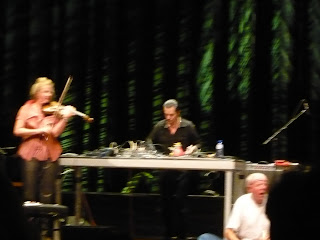 This is the extra 10 minutes encore, Han Bennink doing the drum beat on the floor. 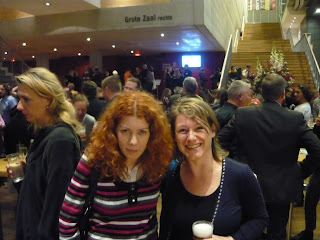 With Winnie, the PR manager of the Nederland Kamerkoor. She was able to recognise me just from my twitter picture. What a nice surprise! 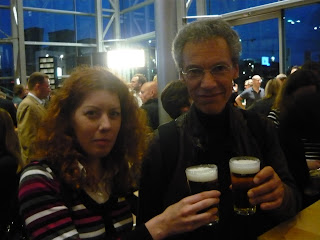 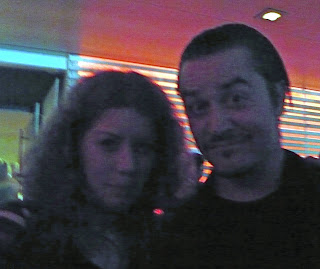 This is the Lakers guy, right? Adam Morrison, is it? LOL, don't kill me, I am just kidding!!! (bad quality, sorry )


Actually, the Vita Nuova Sessions with Instant Composers Pool Orchestra video is also available on yuoutube, so watch and learn or just enjoy:

About ICP (from their fb page): These are certainly all great improvisers in the most unfettered sense. But perhaps what amazes most, beyond that, is the way they wander in and out of strictly composed material. [...] All finding each other at exactly the same moment and abandoning each other at the next. Only one analogy comes to mind: they're like a herd of elephants. Each one doing its own thing, seemingly oblivious to the others. And without any cue they all start running in one direction. Without any signal again they stop. Scientists say there must be cues, but that we humans are just not aware of them. [...] These musicians can swing like mad when they want to, and can play the most sensitive cafe ballad at the drop of a hat.